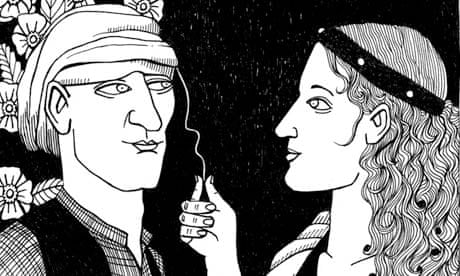 A whole new world of magic animals, brave young princes and evil witches has come to light with the discovery of 500 new fairytales, which were locked away in an archive in Regensburg, Germany for over 150 years. The tales are part of a collection of myths, legends and fairytales, gathered by the local historian Franz Xaver von Schönwerth (1810–1886) in the Bavarian region of Oberpfalz at about the same time as the Grimm brothers were collecting the fairytales that have since charmed adults and children around the world.

Last year, the Oberpfalz cultural curator Erika Eichenseer published a selection of fairytales from Von Schönwerth’s collection, calling the book Prinz Roßzwifl. This is local dialect for “scarab beetle”. The scarab, also known as the “dung beetle”, buries its most valuable possession, its eggs, in dung, which it then rolls into a ball using its back legs. Eichenseer sees this as symbolic for fairytales, which she says hold the most valuable treasure known to man: ancient knowledge and wisdom to do with human development, testing our limits and salvation.

Von Schönwerth spent decades asking country folk, labourers and servants about local habits, traditions, customs and history, and putting down on paper what had only been passed on by word of mouth. In 1885, Jacob Grimm said this about him: “Nowhere in the whole of Germany is anyone collecting [folklore] so accurately, thoroughly and with such a sensitive ear.” Grimm went so far as to tell King Maximilian II of Bavaria that the only person who could replace him in his and his brother’s work was Von Schönwerth.

Von Schönwerth compiled his research into a book called Aus der Oberpfalz – Sitten und Sagen, which came out in three volumes in 1857, 1858 and 1859. The book never gained prominence and faded into obscurity.

This is Your Life

Why do things happen the way they do? Is there a grand scheme? A universal script where cues are taken from actors across the cosmos? Such an idea would imply that something, someone, or some force wrote the destinies of every living being.

Perhaps life is just a random walk, creating our path along the way with every choice we make. Gods of our own life, splitting time as every possible action we can take plays out in parallel worlds. In one of these worlds my brother is still here with me, along with my cousin and grandmother.

Such is the nature of the reality I’m currently living in, and life must go on. I will love and cherish the people in my world, treasure every moment with them. I must do my best to make good choices and not fear mistakes, or feel shy about shining and showing my true colors. To live is to be joyous; not to dwell on regrets or drown in despair. As I stand in the present, I will look out towards the future welcoming the next challenge, with good memories from the past in mind.